Mine to Avenge: Book of Layla #2 Now on Kickstarter!

Have you heard? Robert Jeffrey II is back with issue #2 of Mine to Avenge: Book of Layla #2 on Kickstarter! I reviewed the first issue when it released and I’m elated to tell you about this next one!

Now  on  a  cyberpunk  stage  where  technological  wonders  leave  no  place  for  creatures of  legend,  the  LaLauries  and  their  denizens  reappear,  continuing  their  blood-soaked quest  for  obtaining  ultimate  power.  Time  will  tell  if  the  remaining  members  of  the fractured  Cabal  can  stand  as  the  bulwark  between  humanity  and  the  rising  hordes  of darkness.

Mine to Avenge was created by Robert Jeffrey II a freelance writer of 14 years experience. Jeffrey was chosen along with 5 other writers from over 1000 applicants to take part in the 2017 DC Comics Writers Workshop. His comic book wrting includes DC Comics’ New Talent Showcase 2018 #1, the Glyph Comics Award nominated / winning comic book series Route 3, Ret:con, and Radio Free Amerika. 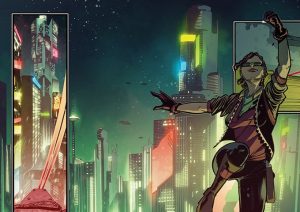 Robert is also a recipient of the 2009 Miller Brewing Company A. Philip Randolph Messenger/Journalism Award of Excellence in the field of AIDS/Health. he is the editor in chief of Blacksci-fi.com and has contributed to such anthologies as Dark Universe: The Bright Empire, and Scribes of Nyota, His client work includes work done for the Centers for Disease Control, RPG developer, New Agenda Publishing, and Nitto Tires. he currently co-hosts the New Wakanda Podcast and A Light in the Sky: A 4400 Recap Podcast.

What are People Saying?

“Great comic, great art, excellent attention to detail. As expected, our appetite for the next issue keeps growing.”

“It has been so long since a book about monsters and the threat they pose has been done in a way that is genuinely creepy and filled with the kind of suspense that grabs the readers’ attention, imagination and doesn’t let up for a moment.”