Shipping a couple in superhero comics is, at best, a very masochistic pursuit. Given the very long term nature of superhero comics, it’s a really bad idea to get invested in relationships that one writer loves, but the next writer tosses out the window. Or off the top of a bridge.

That’s the stuff that’s intentional. That doesn’t include the collective attachment to a couple with potential, despite not having interacted much or at all!

There’s evidence that shipping might be tied to the same synapses that fire during a real life actual romantic relationship you might experience. So seeing your favourite pairing triumph or even just vaguely interact is… pretty great actually.

Which brings me to the 6th of July- International Kissing Day! If there’s one thing I cannot resist in comics, it’s some superhero smooching! Whether it’s a long time coming or a tragic goodbye, this is my JAM.
There’s worse excuses to do a listicle.

These are personal choices on my part, with some influence by Twitter- they may not be the most adventurous choices (in fact one is VERY predictable coming from me) but they mean a lot anyway. Please feel free to suggest some of your own!

I don’t tend to rank my lists- this is a list of five I love equally!

This is an incredibly popular couple, having first come together in Children’s Crusade, suffered some intense relationship drama in Young Avengers and appear to have patched up their differences by War Scrolls # 2. So much so they’re living together in warm domestic bliss! And going to X-men themed drag brunches! Arguably, this is the holy effing grail of shipping, especially for an LGBTQIA couple. I know all couples in comics have at least one half of them fridged at some point, but it’s especially egregious with a gay couple for reasons that should be really bleedin’ obvious by now.

I couldn’t pick between their first kiss in Children’s Crusade- the one that set the ship afloat and their reality saving make up kiss in Young Avengers #13 which is utterly gorgeous. So I went with both.

Speaking of couples broken up for no reason for a series that got cancelled. Oh actually I wasn’t but… whatever.

It’s not the best look to break up a gay couple where one of them happens to be trans. There’s not many trans characters in superhero comics to begin with, let alone any in happy loving relationships. Sorry, do I sound bitter?

Let’s go back to happier times.

Angela is made Queen of Hel and Sera, her loving and devoted wife, is the one who crowns her. They still get a chance to enjoy domestic bliss in a Brookyln apartment, with Leah (another beloved and popular character who’s disappeared lately…) and a Hel hound! This particular kiss is also a transformation sequence- so it’s basically a perfect smooch for queers raised on anime. It’s got some serious Utena vibes and I’m 100% here for it.

Can… can we have them back now?

I was never able to get into the first Runaways run, I found it obnoxious and mean spirited. I’ve come around a bit more since then, especially since the show and the most recent run by Rainbow Rowell. I know, I’m not exactly original for this- but one of the things hugely improved on in that run is… well, it let Karolina and Nico finally get together.

It’s also one of the things the TV show did right as well.

There’s the classic pop culture gay aesthetic we know and love- pastel and goth. It feels like a relief, a huge weight off everyone’s mind when this happened. Plus Kris Anka’s art made this moment really resonate. Since then, they’ve been living that glorious pastel-goth gay aesthetic… for the time being. As of publication, they’re still together, even as other superhero themed relationship drama is kicking off around them. So, that’s cool. Let’s hope it stays that way.

What do shippers masochistically like almost as much as they love domestic bliss? DEATH! ANGST! TRAGEDY! ‘Like’ is probably a strong word, but we do seem to seek it out/write about it in fics a lot? Maybe there’s a cathartic quality to it or, just maybe, it makes it all the more triumphant when the one who dies returns from the dead?

Clark Kent and Lois Lane are the OG of superhero couples. I love them so much. Again, basic as hell, but there’s a reason why they’re classic. It’s not just that they’ve been around literally eight decades. They just work- a human who’s cynicism, curiosity and tenacity is barely contained in a fragile human body with a literal alien almost god who’s nigh on indestructibility contains a kind, soft and warm personality. 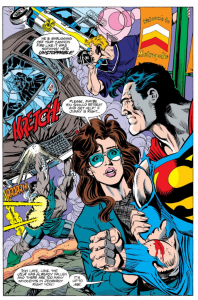 (Shout out to my boy Dan Jurgens for writing human love interests with like, motivation and character? At least for my two favourites).

The comics you read as a teenager stay with you and The Death of Superman is no exception. This moment, before Superman throws himself into a battle that ends his life, is heartbreaking, bittersweet and tragic- almost as much as the aftermath.

Even Batman v Superman couldn’t ruin this moment for me. Exploring Lois struggling to rebuild her life, unable to mourn the man she loved in public or even comment on the media circus, the lies and his legacy being misused… this is peak superhero writing.

One of the hardest things about shipping Jane and Thor, is admitting that they really never stood a chance. It’s hard, because it would’ve worked if Odin hadn’t have interfered. They were equally matched in spirit, if not in body. So, it’s kind of special to me that their last kiss is one where they are matched in both. Briefly. 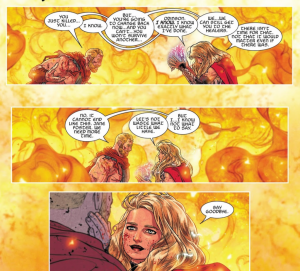 Also, Russel Dautermann said this was his favourite moment to draw in the whole run, in The Art of War of the Realms, he said he particularly wanted to add Jane’s last moments, as her mortal self, standing on her very tip toes to give him her last breath. Also he added her taking off the helmet- that wasn’t in the original script he was given. Plus Jason Aaron admitted to crying whilst writing it.

Like the Death of Superman, an unstoppable and angry monster has been defeated, but not without sacrifice. In fact, it’s that sacrifice that stopped him. She only asks for a goodbye from the man who she still loves very much, and clearly loves her back, even if their chance at being together has probably passed. As far as they knew, it might be their last chance.

Please excuse me, I’m not crying whilst I type this I’ve just got something in my eye.

On that note, I’m going to dry my eyes and listen to a sad Dance with the Dead track for completely unrelated reasons.

Safe shipping out there and happy smooching everyone!