I have a weird affinity for the Ghost Rider. My older brother was and still is at heart a metal head. Iron Maiden is his jam and he still always finds a way to see them whenever they are on tour, even if it means traveling hundreds of miles to do so. So as a teen his room was often littered with album covers, cassettes, and posters of his favorite bands and while my music tastes trended more toward alternative music I was mesmerized by the heavy metal imagery.

It was amongst my brother’s regalia that I read my first Ghost Rider comic (Ghost Rider #43 to be specific). I of course knew who the character was but I’d never delved into Johnny Blaze’s stories until I found that cache of comics in my brother’s room. He’d picked them up somewhere but he wasn’t that interested in comics so they ended up in my room and I enjoyed the books. They weren’t the greatest books I had ever read but they were fun and the Ghost Rider has an incredible look to him that leaves an impact. Then the ‘90s came and a new Ghost Rider was born.

My brother was in college so I bought him the first issue and gave it to him the next time I saw him and to my surprise he actually collected it for a time but like the previous incarnation those books ended up in my collection as well and it too was a fun read at first but then it got caught in the messiness of mid ‘90s Marvel. So any time I see a new Ghost Rider book I’m on board to at least have a look and so I was excited to see the newest book by the great creative team of writer Ed Brisson and artist Aaron Kuder.

Although there are already two Ghost Rider’s in the Marvel Universe right now, Robbie Reyes and the Cosmic Ghost Rider, I haven’t read their adventures past the initial first issues. So I haven’t consistently read Ghost Rider since Jason Aaron’s magnificent run back in 2010 (if you have not read this run do yourself a favor and do so now).

So, I came into Ghost Rider #1 a bit clueless as to what has been going on in the world of the Ghost Rider. To be fair the Ghost Rider as a concepts has had its origin rewritten time and time again so as long as I could figure out the main characters I was good to go. Ghost Rider #1 was an absolute blast to read. Brisson and Kuder obviously have an affinity for the character and just like myself they are fans of the early Ghost Rider (Johnny Blaze) who is now the King of Hell.

I don’t know how this elevation in rank occurred nor do I care but apparently not every denizen of hell is happy with Johnny’s rule and so the Ghost Rider must once again ride to recapture all of the demons who have escaped from their eternal damnation. Danny Ketch, the Ghost Rider of the ‘90s and Johnny’s Brother (it’s a forced retcon) is back, now owning a bar and venting his frustrations while his unruly patrons beat the crap out of him. 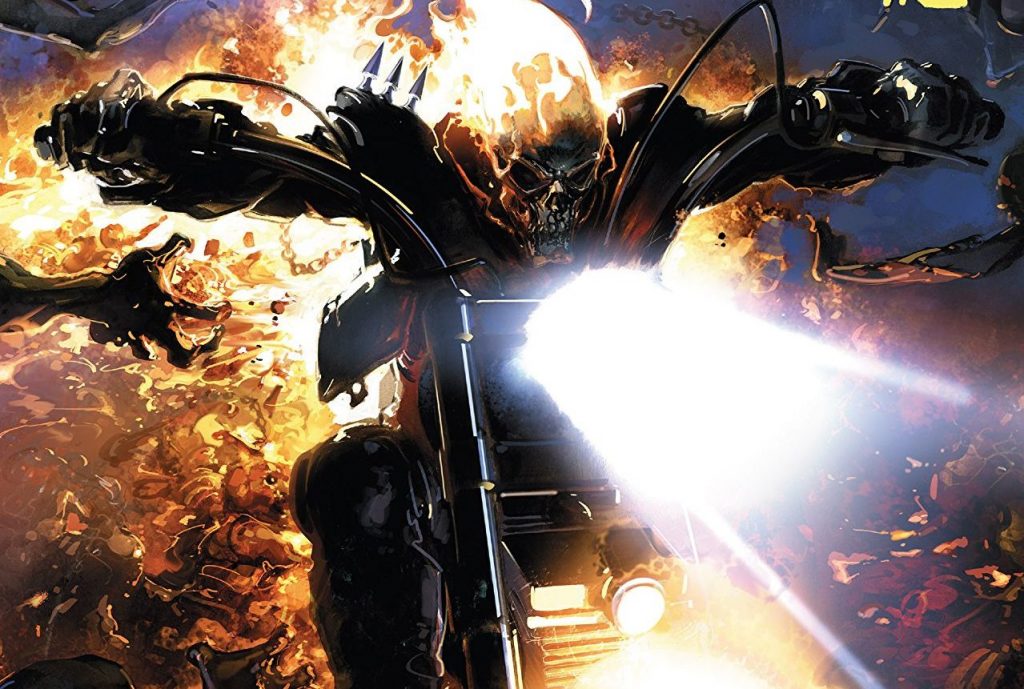 Yet Danny is still a Spirt of Vengeance and when a rogue demon threatens Manhattan he once again rides into the fray. With more going on in Hell then originally suspected and several call backs to stories from the Midnight Sons imprint Ghost Rider #1 was a hell of a first issue with an interesting cliffhanger that will definitely bring me back for issue #2.

I enjoyed Ghost Rider #1 for more than I thought that I would but I shouldn’t be that surprised as this is an A list creative team. After cutting his teeth at Image for years it’s nice to see Ed Brisson taking on more and more at Marvel and he obviously has a fondness for the Ghost Rider’s. This issue was easily accessible for new readers and returning readers who lost their love of the Ghost Rider over the last few years as it became invested in Hot Rods and Cosmicness rather than the chopped motorcycles of its glorious past.

And those motorcycles haven’t looked this good in a long time as Aaron Kudder seems born to draw this book. His Ghost Rider’s are scary and perfectly capture the individual look of Danny and Johnny as the Rider. This was an excellent return of an iconic character and one that I hope will stick around for a while.

« The Greatest Comic Ever?
Once and Future King #2 Review »