From the mind of famed author Roosevelt Pitt, Jr. and award-winning artist Nate Ledesma comes a story of epic proportions.

The time: The far distant future

The Place: Kenya, Africa where lies the most highly technological city known to man- Hermopolis 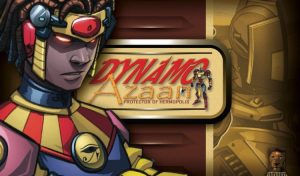 A haven of spiritual enchantment fueled by the Egyptian gods of old, Hermopolos is revered as the Utopia of the modern age of man. It’s here that lives are forever changed and discoveries are born. But where gold sparkles there are those who lie in wait to covet it. And then there are those who seek to control it at any cost.

Enter the world of Dynamo Azaan Dreamer, Adventurer, Hero, and the most powerful mech on the planet. Piloted by his eleven-year-old creator Jamil Khalid, Dynamo embarks on a quest of self-discovery as he faces threats that could tear his beloved city asunder.

Dynamo Azaan, a mech imbued by the gods of Africa, to protect a city whose existence ensures humanity’s survival and explores the importance of family and the challenges it presents. Dr. Yassir Khalid and his son Jamil, both blessed with astounding intellect embark on a journey of truth and self-discovery as they are faced with the reality that the woman they both love as a wife and mother, is actually a goddess

« How The War Was Won: A Retrospective of War of the Realms – Part 2
Sandman Roundtable: Perchance To Stream? »