After missing the month of September for the Solicitations Rundown I am back. Today, we’ll take a look at DC’s lineup of comics for the horror-filled month of October.

A new horror comic imprint launches at DC with Hill House Comics. Joe Hill is kicking off this new imprint with Basketful of Heads — the story of June Branch who must save the man she loves from dangerous criminals with a mystical Viking axe. Hill will be joined by Leomacs on art to deliver a story filled with disembodies heads. This six-issue mini-series will be the birthing ground of many horror-based series which is very fitting for the month of Halloween.

Another Batman centric comic is set to hit the stands in October with The Batman’s Grave. The superstar team of Warren Ellis and Bryan Hitch will join forces in this maxi-series. Bruce Wayne is set to confront death in a way he has never done before. Will the caped-crusader fill the grave next to his parents find out in October.

THE BIRDS ARE BACK! Black Canary and Huntress are set to collide with Harley Quinn in what will be undoubtedly an interesting team-up. Noir writer Bryan Azzarello is teaming up with Emanuela Lupacchino and Ray MacCarthy to help the Birds fly to new heights (pun fully intended).

October is the month of Joker and Harley. Readers beware because Kami Garcia, Mico Suayan, and Mike Mayhew are about to take you on a bone-chilling adventure. The Joker and Harley’s relationship is an infamous one, but this series will give you a true-to-life take on it in 9 thrilling issues.

In October psychological horror is everywhere. The Eisner nominated creative team of Andrea Sorrentino and Jeff Lemire reunite for a 3 issues mini-series about everyone’s favorite Clown Prince of Crime. Dr. Ben Arnell believes he’s the one who can finally diagnose the Joker, but this crazy clown is not one to go down without a fight and has many twisted tricks up his sleeve for the good doctor.

The Last God rises again in this dark fantasy epic by Phillip Kennedy Johnson, Riccardo Federici, Dean White, and Jared Blando. Two bands of Heroes attempt the same mission 30 years apart, but one must succeed where the other one failed in this new on-going series.

Just when we thought the Dark Multiverse was forgotten Dan DiDio says no. This new Metal Men series will look at the meaning of being sentient. Liquid Nth Metal seems to have come from the Dark Multiverse and Doc Magnus’ team will have to take care of it. Joined on art by Shane Davis and Michelle Delecki DiDio will deliver this new thrilling 12 issue maxi-series.

This comic series is coming in as a tie-in to the hit Rooster Teeth web series of the same name. Follow the RWBY team as Marguerite Bennett and Mirka Andolfo are set to paint a new chapter of their lives in this 7 issue mini-series.

I mean… the title says it all. Adapted from the 1940’s radio serial “Clan of the Fiery Cross” join Gene Luen Yang and Gurihiru on the most satisfying story of the year. Superman will be joined by the Lee family to, well, Smash the Klan in this 3 issue mini-series.

Batman: Creature of the Night #4

The Kurt Busiek and John Paul Leon Batman mini-series is coming to an end in October. After 4 issues this bizarre tale is finally ending after being resolicitated.

The most thrilling crossover of the year is coming to an end. James Tynion IV, Freddie E. Williams II, and Kevin Eastman are writing the epic conclusion to this Multiverse threatening story. 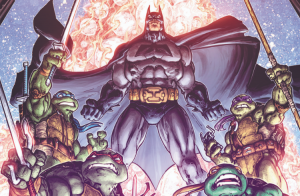 The conclusion to the zombie event of the year unfolds in October. Tom Taylor takes what’s left of humanity in a last stand against the zombie menace with the help of Trevor Hairsine, Neil Edwards, and Stefano Gaudiano.

The already controversial Black Label mini-series is coming to an end. Frank Miller and John Romita Jr. will take Clark Kent to Metropolis. Clark will meet with Lois Lane and Lex Luthor. This is topped by the formation of the Trinity.

Year of the Villain

The Joker is receiving his own Year of the Villain one-shot written by the legendary filmmaker John Carpenter. The Joker will rise to new levels of twisted with the help of Anthony Burch on art. Another villain, in October, will receive his own one-shot: Black Adam. The team of Paul Jenkins and Inaki Miranda are handling the conflict that will ensue when an infected Shazam invades Adam’s kingdom.

Entering its second year the Sandman Universe brings John Constantine to its pages. This one-shot will focus on the one and only Hellblazer. Written by Si Spurrier and with art by Marcio Takara this will be the perfect jumping-on point for the next chapter in the Sandman Universe.

DC’s annual Halloween themed comic is here with a murderer’s row of talent. This oversized one-shot will reveal the most sinister secret of the DC universe.

Tales From the Dark Multiverse

In October DC is reimagining some of their most important events. Tales From the Dark Multiverse will take readers on a bunch of what-if scenarios that will leave readers asking for more. This begins with DC’s most popular characters: Batman and Superman. Knightfall is set in a universe where Batman was broken and failed in regaining the mantle while Death of Superman is set in a world where Superman never came back to life and Lois Lane vowed revenge.

That is all for me folks! Don’t miss out on all the electrifying action DC has in store for us in October. Stay tuned on here for my rundown on Marvel Solicitations later when they drop this week.

« Work-Life Balance Tips From Supernatural Beings [Comic]
How The War Was Won: A Retrospective on War of the Realms – Part 1 »